How - and Where - People Watch Video and Broadcast Programming

Despite all the other sources for news, television still dominates as the most influential. Research shows it’s the primary way most people get their news. For example, on election night last November, 88% of voters tracked the returns of the US presidential race on television, according to the Pew Research Center.

However, there are now more ways to consume broadcast programming, including via mobile devices and over-the-top services. According to Nielsen, although live TV along with DVR/time-shifted TV has a weekly reach of 214 million adults, TV-connected devices, such as game consoles, reach 106 million. Smartphone video reaches 110 million viewers, while 78 million viewers watch broadcast programming via their PCs. 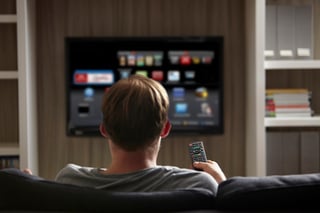 Total Audience Report Q2 2016. Viewers do spend a significant amount of time watching via app/web on their smartphones: 1 hour and 43 minutes on average. By contrast, the average time spent watching each day via the internet on a PC is 57 minutes, and 30 minutes for time-shifted/DVR viewing.

These statistics underscore the influence of broadcast media. As access to broadcast content continues to diversify, it’s worth looking at a few other notable trends in video consumption.

Americans no longer sit idly while they watch their favorite television programming. As the number of smartphones and tablets increases, viewers are more likely to multitask, sharing opinions and conversing with friends while keeping an eye on what’s happening on the screen. According to Nielsen’s 2016 Social Media Report, “21% of tablet users said they use their tablet while watching TV ‘several times a day,’ while 30% of smartphone users said they did so.”

There’s still a large portion of smartphone owners who aren’t using their devices to watch video.

Although one in four US smartphone users say they watch TV shows or movies on their devices every day, eMarketer re

ports that more than a third say they never have.

Another important trend is time-shifting of television content. Nielsen surveyed viewers’ habits in the first seven days after a program aired compared to viewership between days eight and 35 after broadcast. They found 92% viewed a specific broadcast drama during the first seven days, compared to just 8% who watched it 8-35 days after. However, they noted that 43.5% of playback viewing happened between days 15 and 35. This translated into an overall ratings lift of 9% beyond day seven.

By contrast, when looking at a certain cable reality show, Nielsen’s data uncovered a preference watching the show live, rather than at a later time, with just 4.9% of viewing happening after the first 7 days.

So while time-shifting is popular, preferences change depending on the type of program.

4. Over the Top Services

The availability of over the top services – the ability to get film and TV content over the internet, rather than through cable or pay TV – is potentially disruptive to traditional viewing trends. PwC says 78% of US consumers subscribe to at least one OTT service today. And just 79% say they would subscribe to cable in the next year, a significant drop from the 91% who said so in 2014.

Further signs of change come from Nielsen, who reports that while 45% of adults overall say they watch live TV, younger viewers are less likely to watch it than those over 50 (31% vs 56%, respectively). Younger viewers are much more likely than older generations to watch on a TV-connected device (11% vs 3%) and on a smartphone (24% vs 11%).

Another group that is more likely to use alternative devices to view content is Latinos. This is a fast-growing population that is expected to reach 119 million in 2060, an increase of 115%. They tend to watch more video on the Internet and on their mobile phones than non-Latino whites. This media-friendly group also presents an opportunity for entertainment and media companies, says PwC.

Not surprisingly, stay-at-home moms and working mothers watch TV at different times of the day. But both prefer live TV when they do view programming, spending on average two hours and 46 minutes daily watching it. Nielsen also reports they spend 30-36 minutes a day with time-shifted content.

Regardless of how – or when – viewers consume video, it’s important to remember the content is created by broadcasters and most often delivered first on live TV. That makes it extremely important for brands to have a broadcast media monitoring program in place, especially if they want to catch errors quickly or stay ahead of the news cycle.